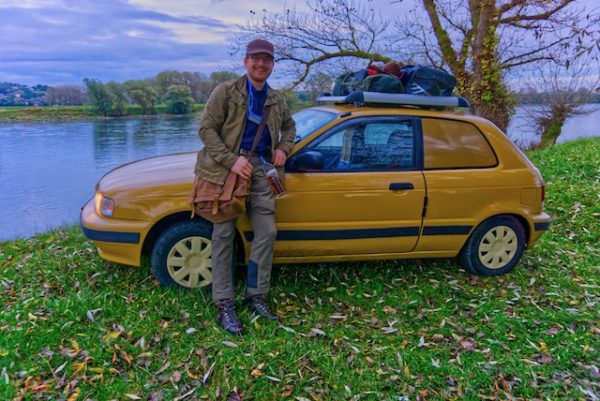 Like most other people around the World, Frederik Kessner had high hopes for the year of 2020. In his case, he prepared to get all three of his childhood travel dreams done in just this one year.

But instead of taking the first of his three trips, he and his Colleagues of a bottling and filling equipment manufacturer worked extra hours to get gear usually used for consumer drinks refitted for hospitals in an attempt to ease the sanitizer shortage during the first wave of this ongoing crisis.

“To go somewhere else is nice; I like to do it. But at the end of the day, I am still just a tourist. I do not need to go anywhere. All that stuff is still going to be there after this is over. So there is no need to rush anything just because I could, especially if me rushing it means potentially prolonging it for others.”

Instead, he used his September vacation time, originally meant for his second trip, to not only push his university studies further ahead and to support the DMC with a wide variety of current and future projects but also to deepen his preparation for the trips he originally planned. Most of that time was spent on his car, which he dulled down from red to a calmer Sahara-beige with a wrap as part of a complete mechanical and electrical overhaul. Having the next years already planned out, even with the effects of the pandemic waving, he now considers 5-10 years a realistic timeframe to achieve his original plans.

“That’s the handy thing about being dull; you can prepare. And preparation makes doing easier. That’s the problem with exciting people. They always want to do stuff, but they never want to prepare for it, so everything ends up too hard for them. So they end up doing the same thing everyone else is doing. And as we have seen during the lockdown, even doing nothing seems to have become way too hard for most people to do.”

This general sentiment doesn’t seem to be very popular though, especially among young Europeans. While Australia, which has almost no cases at all, has just extended its complete travel ban until at least late 2021, Italy has announced that it will prolong its state of emergency, among other extreme counter-measures, after the recent influx of these young travelers to cities like Nice, Venice, and Rome worsened the crisis there once again. Meanwhile, Europe as a whole just surpassed both Americas in new cases, putting it in the lead worldwide.

“Frankly, the thought process behind wanting to go to a country in the midst of a national emergency in the first place is entirely beyond me. Just because a region isn’t considered high-risk anymore doesn’t mean there is no more risk at all, and the loosened restrictions are meant for people with good reasons to travel cautiously, not for people to get their yearly Instagram shots in, or because they just had to have that summer vacation. And they are using every possible bogus justification they can find to justify it. I really wonder who they could possibly be trying to impress with that.”

He wasn’t the only one staying at home. All his older colleagues at work did the same this year. No one wants to be the one responsible for a potential lockdown at work. Here it seems, the memory of the situation in spring still sits deep.

“We will spend a lot of time recovering from this, not only economically, but also socially. I am sure the question of what one did during the summer of 2020 will become a staple in conversations both private as well as professionally in the coming years, and the results of that will not be pretty for most of these people.”