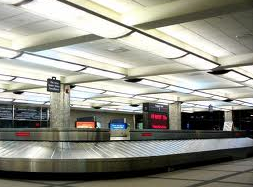 One of the highlights of the Dull Men’s Club (www.dullmen.com) is a list recording which airport luggage carousels rotate in a clockwise motion (e.g. Johannesburg’s OR Tambo) and which ones rotate in an anti-clockwise direction (e.g. Port Elizabeth).

This fascination with the motion of luggage carrousels is not at all surprising if you consider that one of the main aims of the club is to find ‘safe excitement’ — the emphasis being on ‘safe’. It was probably a self-distraction technique devised by some anxious frequent traveler who had to spend many long minutes after each flight staring at the carrousel wondering what had happened to his carefully packed suitcase. Has it been stolen? Was it incorrectly routed to Uzbekistan? Has some baggage handler ripped out the sides of my bag in order to crumple my neatly pressed shirts?

My black suitcase still hasn’t come through even though just about everyone on the same flight has already picked up their bags. I knew should have had it wrapped in plastic, but they are still charging R50 per bag. The price went from R20 to R50 during the Soccer World Cup, but after the Cup the price did not revert to the previous prices. What a rip off, but I still should have done it.

The carousel stops. Everyone has gone as I stand alone waiting for my suitcase.

I find an official looking person who must be official because he is wearing a reflective bib, “Have all the bags been unloaded?, I asked.”

“What flight were you on sir?” comes the question to my question. I suppose that the fact that I was standing in front of a sign that said ‘Accra’, was not a real clue.

“I have just arrived from Accra, Ghana,” I respond.

“Well, that flight has landed already.”

“I know that. I was on the plane, but where’s my suitcase?”

“Have you checked at the Special Luggage counter?” he asks in a tone especially reserved for morons and customers.

No, of course I hadn’t checked the Special Luggage counter because my suitcase is very unspecial. In fact it is decidedly mundane. But, believe it or not, there was my very ordinary suitcase sitting patiently among the ski-poles, musical instruments,  surfboards and other bizarre bits of baggage.

This time I got my suitcase which will not be counted among the 1.6 pieces of luggage out of every one thousand that are pilfered every day at the country’s largest airport.

What a relief, not only do I have my luggage, but I have confirmed that the carousel rotates clockwise at OR Tambo.