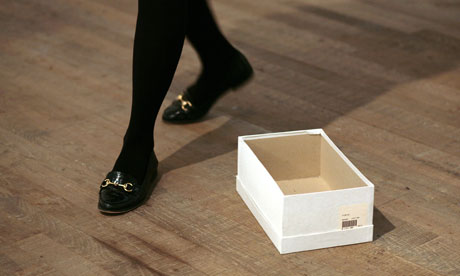 This quote from the article “Watching Gabriel Orozco’s Box” from guardian.co.uk — about an ordinary shoe box on the floor at the Tate Modern in London — deserves the attention of dull men:

“At the Venice Biennale, where the box was first shown in 1993, people reacted by leaving money in it. At New York’s Museum of Modern Art, where it was last shown, the box was apparently often manhandled. But how is London taking to it? And could an eight-year-old make something better? I spend a day with the box to find out.”

Thanks for this riviting article. I am in Harrogate today, London tomorrow. I’ll go to the Tate to see this for myself.

This paragraph from the article is right up our alley:

“The box attracts attention through its ordinariness, but for the viewer, this ordinariness is not interesting in itself; only the interaction between the box and the gallery-goer that such ordinariness subsequently seems to allow, and even solicit, is interesting. The gallery, however, is less concerned with what the box’s dullness enacts; its primary interest is the dullness itself. The box is on loan to the Tate; as a result, the gallery’s main concern is that the box remains intact, even if this ends up discouraging the interaction that the box was intended to invite.