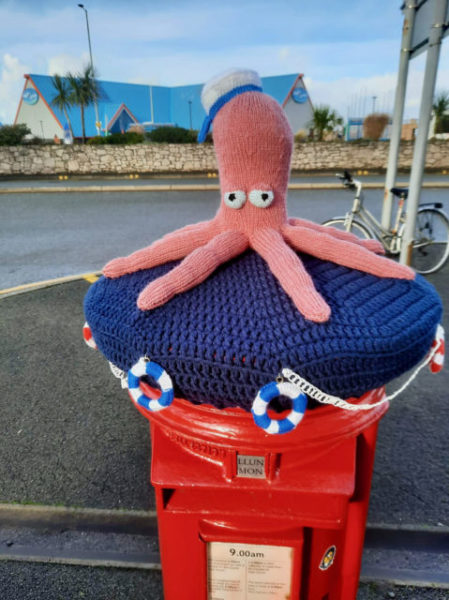 Rachel, a retired police officer in Rhyl, now a yarn bomber, has crocheted over 100 ‘toppers’ for postboxes. ‘She’s the most prolific postbox topper maker there is’, says Belinda Goldsmith, author of the charity book Lockdown Letterboxes: A very British yarn about the rise of postbox graffiti knitters during COVID.

Rachael had been knitting for over 50 years. When she was a police officer, she found that doing some knitting when she got home turned her mind off from the child abuse and other unpleasant things she’d been dealing with. pp

Although she did not consider herself a crochetier, when COVIC arrived she decided to try to push her boundaries and crochet a postbox topper. She was surprised. She was saying, “Wow, did I do that?’.

‘It started when I was with Ruth, my twin sister, picking up prescriptions at the chemists. There was a long queue all socially distanced, all looking so sad. There was a postbox nearby. I told Ruth I’m going to put a sparkly hat on that postbox to see if I can cheer people up. It did’.

At first Rachael was secretive about new passion. She and Ruth would go out on their bikes early in the morning or late at night to install the toppers. Then the Rhyl Journal put out a plea for the secret yarn bomber to come forward. Rachel answered the plea.

“I find it fascinating. I’ve usually do a topper a day.”

‘People’s reactions blow me away. They talk a lot about it. They walk around town to see how many they can spot. Parents take photos of their kids standing alongside post boxes I’ve topped.’

Residents of Rhyl are helping. ‘You should see my lounge. It’s full of wool that’s been donated’.

‘Even the mayor even stopped by. We sat out in the garden. She presented a certificate to me’.

‘I just can’t believe how my retirement is turning out. It’s certainly not boring like I feared it might be’.

She added: ‘Postboxes without a topper look naked to me now’.