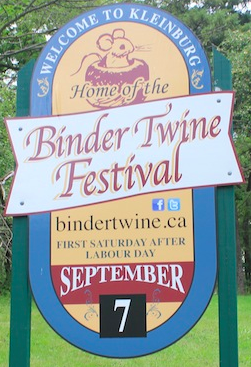 The highlight of September in Kleinburg, Ontario is their their annual Binder Twine Festival.

The festival began in the 1800s when farmers came to the Kleinburg to buy twine to bind sheaves of wheat. The hardware store owner, Charlie Shaw, provided food and entertainment to the farmers. This became an annual festival and continued until Charlie’s death in 1931.

In 1967, a small committee revived the concept of Binder Twine as Kleinburg’s centennial project. It was so successful that it once again became an annual event.

The festival takes place each year on the first Saturday after Labor Day.

The highlight for many is the Queen Contest — “young ladies” from 16 to the seemingly immortal may enter.

Thanks to funds from the festival, there now is a Binder Twine Park in Kleinburg.