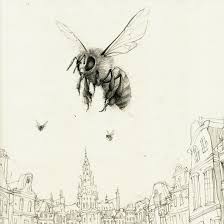 Bumblebees prefer the buzz of cities instead of quiet countryside, according to a finding of a “citizens’ science” study under the auspices of the Center foe Ecology & Hydrology (“CEH”), Wallingford, Oxfordshire.

Participants in the study, 30,000 people, mostly children, took notes about the number of bumblebees they saw visiting one foot wide patches of lavender in five minute periods. They recorded 4,000 bumblebee sightings from all across the UK. More bumble sightings came from cities than either the suburbs or countryside.

Bumblebees were found to be concentrated on floral areas such as pots and baskets of lavender.

In addition, bees showed a marked preference for English rather than French lavender. French lavender has ornamental flowers that impedes bees’ access to nectar.

“Bumblebees get biggest buzz from city life” in the Telegraph

Want to keep bees in the a city?: