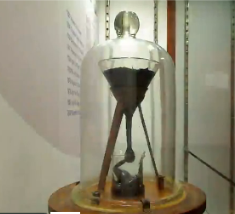 Watching paint dry is breathtaking compared to waiting for the next drop from the Queensland University’s Pitch Drop Study.

But excitement is rising now. Professor John Mainstone, who has run the experiment since the 1960s, says because a ninth drop looks set to emerge from the pitch block in the very near future.

“No one has actually seen a drop emerge, so it is getting quite nervy round here,” said Mainstone. “The other eight drops happened while people had their backs turned. For the most recent drop, the one in 2000, we had a webcam trained on the experiment, but it broke down. In 1988, when the drop before the 2000 drop was about to emerge, I popped out for a coffee and missed it.”

The experiment was set up in 1927 to calculate the viscosity [thickness, stickiness] of the world’s stickiest substance, pitch, which has been found to be at least 230 billion times more viscous than water. It is the world’s oldest laboratory experiment.

The information above is based on an article “World’s oldest and stickiest lab study ready for drop of excitement” in today’s Guardian.

Interesting comments about the article:

•  I expect the training for the gig involves watching cricket.

•  If they manage to film it this time, they should post in YouTube so we can all watch it.

Thanks to Catherine Brooks (Yorkshire), and François Gojat (France), and Steve Reszetniak (Enfield) for emailing this exciting news to us.