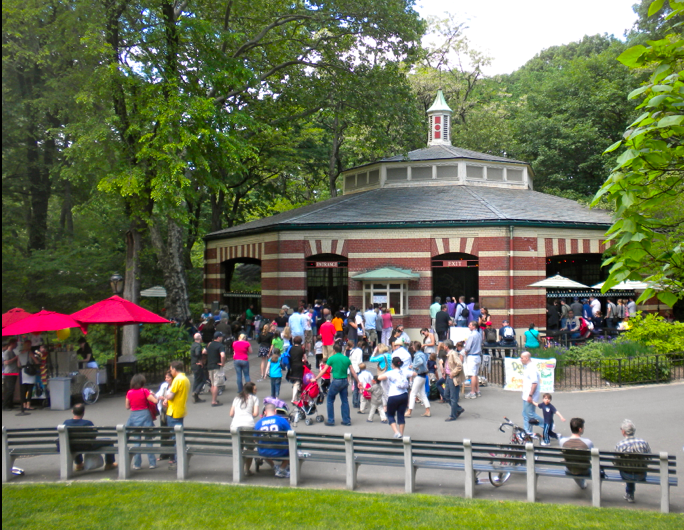 •  The carousel, located towards the southern end of the park, is one of America’s biggest carousels.

•  It’s the fourth carousel to be there.

•  The carousel has 250,000 riders each year. Queues on nice days wrap out around the balloon, popcorn, and hot dog carts.

•  It has 57 hand-carved horses and two chariots. It is over 100 years old and has undergone many rounds of repair and maintenance.

•  A mule and horse powered the first carousel. They were underneath the carousel and were trained to start and stop based on instructions the carousel’s operator gave by tapping his shoe on the floor.

•  The next two carousels were steam powered. Both were destroyed by fire.

•  In 1950, the Department of Parks and Recreation began searching for a replacement carousel. They found one abandoned in an old trolley terminal Coney Island. It was built in 1908 by Solomon Stein and Harry Goldstein.

•  A donation from Alan and Katherine Stroock to the Central Park Conservancy was used to restore the carousel, including each horse, and the surrounding area.

•  The present carousel is operated by Donald Trump.

If you can’t make it to New York, you can do the next best thing — enjoy the carousel via YouTube: http://www.youtube.com/watch?v=JpJw5FYWd_8