Collecting discarded shopping lists, fine hobby — but recipes from them? 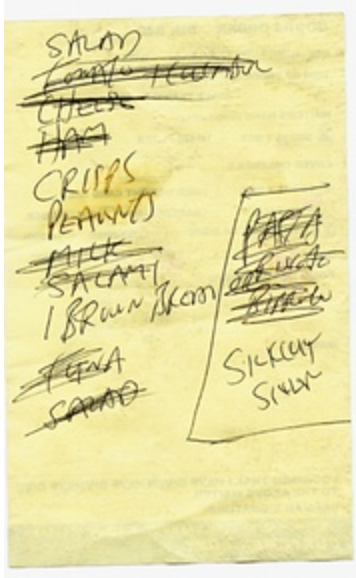 ‘ I was shocked’, William Watts said when talking with reporters on his way out of his lawyer’s office. He’d been meeting with the lawyer about a lawsuit Watts is bringing again Tom Wakeman, photographer and avid collector of discarded shopping lists.

Watts was shocked when he bit into a battery burger prepared by a recipe written by Wakeman.

After collecting shopping lists for several years, he began making recipes based on things on the lists. The dishes are described as ‘funny, faintly nauseating dishes that make you do a double take’ in ‘Battery burgers and mice poison ragu – the recipes made from old shopping lists’ in the Guardian.

A  battery burger is good news, however, for people trying to cut down on how much they eat — it’s only 14 volts.