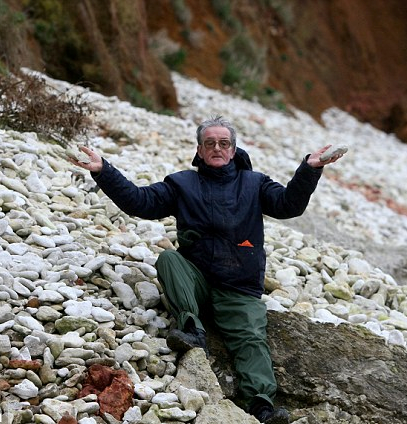 Michael, who lives in Hunstanton on the Norfolk coast, spends two hours every day, except Saturdays, moving rocks to build a seawall that prevents erosion of the cliffs along the coast.

“I used to walk to Old Hunstanton and back, two and a half miles every day, but that wasn’t enough physical exercise for me. I started moving rocks and now I can’t stop. It’s better than sitting in the armchair and I’ll do it for as long as I’m healthy.”

What about Saturdays? It’s a day off when Michael, a Chelsea fan, watches sports on TV.

He’s adored by local residents. “He’s the sort of character who takes the British seaside what it is,” says Hunstanton Mayor Peter Mallam.

He’s our winner this year. He’s doing something that’s truly routine and unglamorous. He is accomplishing something important — saving a seawall.

His persistence in doing it methodically and continually day after day is remarkable. He’s not doing it for glory. He’s out there alone. No one is out there cheering him on.

Others can and should do things like this, such as:

John, a computer scientist at the University of California, Berkeley, set out to answer the crucial question, “Does a Kindle weigh more when loaded with books?”

John found the answer by using Einstein’s formula E=mc2. Although an e-book does not change the number of electrons in an e-reader, the electrons holding the book have a higher level of energy. Given the relationship between energy and mass in E=mc2, the electrons with higher energy have higher mass and therefore weigh more.

More about John is in The Telegraph, The Guardian, and The New York Times [source of the drawing shown below of a Kindle weighing itself]

Terry Green, someone few people have ever heard of, is heard 30,000,000 times in 8,000 locations every month throughout the UK. It’s Terry’s voice saying, “Cashier number three please.”

Not only does Terry provide the voice, he designed the number-announcing system for queuing and got it implemented.

Read about Terry on his website terry-green.co.uk and in the Daily Mail [source of the picture of Terry shown above] and The Guardian.

John, a professor emeritus of philosophy at Stanford University, is a self-diagnosed procrastinator and self-help author.

He wrote an essay “How to Procrastinate and Still Get Things Done.” The essay established the principle of Structured Procrastination. According to the principle, “the procrastinator can be motivated to do difficult, timely, and important tasks, as long as these tasks are a way of not doing something more important.”

The essay was published in 1996. Fifteen years later, in 2011, John was awarded the Ig Nobel prize.

Patience is one of the many character strengths of dull men.

When taking time off from procrastinating, John enjoys safe excitement. Jumping rope with seaweed is his specialty:

Read more about John on his website structuredprocrastination.com [which is where we found the jumping rope picture], in The Chronicle of Higher Education [source of the hour glass drawing above], and in The Wall Street Journal.