First trainspotter? . . . BBC News reports on who may have been the world’s first one 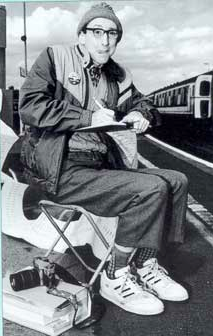 “Who was the world’s first trainspotter?” in BBC News Magazine

The first trainspotter may have been Jonathan Backhouse who watched the inaugural journey of the Stockton to Darlington railway in September 1825.

He wrote a letter — filled with enthusiasm — to his sisters that is likely to be the earliest documented evidence of trainspotting.

The letter is on show at a new trainspotting season at the wonderful National Railway Museum in York.

“Discover the adventure, mischief, and drama of trainspotting through a fascinating season exploring the much misunderstood hobby” says the website for the Trainspotting Exhibit at the railway museum.

We know who the first drainspotter is — and he’s probably the only one: DMC member Archie Workman.