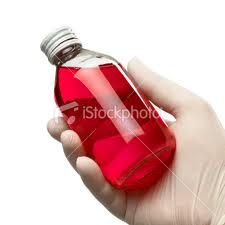 The terrified man runs.   Rushing upstairs to the bathroom, the man locks himself in. His heart is pounding; his head is reeling; he’s gasping.

With a loud crash, the casket breaks down the door.  Bumping and clapping toward him.

The man screams and reaches for something, anything, but all he can find is a bottle of cough syrup. Desperate, he throws the cough syrup at the casket.