How to sharpen pencils – instructional video 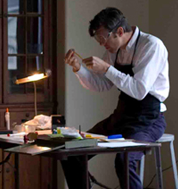 In our blog post about persistence two days ago, we used a photo of a pencil that symbolizes persistence. The pencil had been sharpened down to being a mere stub.

The sharpening was obviously not artfully done:

There is an artful way of sharpening pencils. David Rees in Beacon, New York is making  career of it, as is shown a CBS Sunday Morning episode “The art of pencil sharpening.”

David has a website that explains his work and what he has to offer: “Artisan Pencil Sharpening.” The website has a link to his video “How to Sharpen Pencils.”

Last December, a pencil sharpened by David was our gift suggestion for Day 10 of our 12 Days of Christmas Gifts.

Trivia to toss out that’ll make you a bit hit at the next dinner party you attend: as David mentions in the CBS video, it’s not “lead” in pencils, it’s “graphite.”

A large deposit of graphic, a high quality type of carbon, was discovered in Borrowdale, England in 1564 — bits of a shiny, black substance on roots of a tree that had fallen down. People found that it was good for writing and drawing.

It was difficult to hold the bits of graphite. Initially they were wrapped in string or sheep skin to make them easier to hold. Later the graphite was inserted into hollowed out wooden sticks — pencils were born.

The graphite was called “lead” in the sixteenth century because they thought it was black lead instead of graphite.

There’s more about this in an article “Pencil Myths: The Unleaded Pencil” on the website pencils.com.