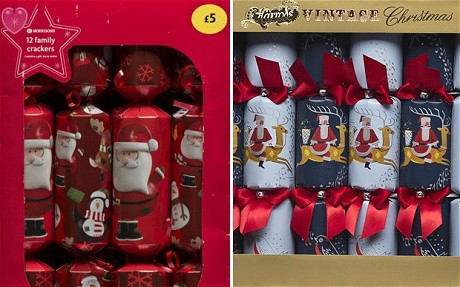 I expect those of you who are Christmas Cracker aficionados already read the article in the Sunday Telegraph about the panel of experts’ ratings of this year’s cracker offerings.

I found the article to most helpful when I set out to buy crackers.

Morrisons won. Their crackers had the loudest bank, an ear-splitting 81 decibels, classic hats, and a really funny joke:

“Dad, there is a man at the door collecting for the new swimming pool.”

“Give him a glass of water [exclamation mark removed]”, replied the father.

Harrods’ flaws, compared to Morrisons, apparently were a muffled bang, only 78 decibels, and flimsy hat. They had a good joke though:

“I’m worried about you always being at the bottom of your class” said the father to his son.

“Don’t worry dad,” the son replied. “They still teach the same thing at both ends.”

Price also played a role — a tenfold price difference: 50p for a Morrison cracker; £4.99 for a Harrods cracker.

Merry Christmas to all my Dull Men friends