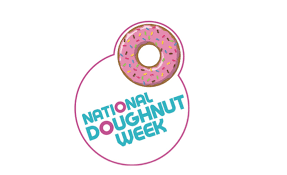 Bakers throughout the UK sell doughnuts to raise dough (pun intended) for The Children’s Trust, a charity that provides care, therapy, and education for children with disabilities and health needs.

The study of donuts is interesting indeed. What are particularly fascinating are the various theories about holes in donuts — who invented them, what’s their purpose?

It is reported that in 1847 a young seaman in Maine, Hanson Gregory, suggested to his mum that she put a hole in the middle of her fried cakes so the cakes would cook in the middle.

Another story is that Hanson suggested the hole to his mum so he could keep the doughnuts in a handy place — on the handles of the ship’s steering wheel.

And then there’s the story than an Indian attacked a woman on Cape Cod who was making doughnuts. The Indian shot an arrow at the woman. The arrow missed the woman but hit one of the doughnuts, leaving a hole.

Cops love this week — they support it wholeheartedly: