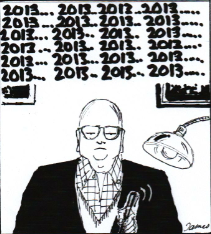 As we reported to you in late December, on New Year’s Eve many of us Dull Men would be staying in (we don’t get out much anyway) to practice writing 2013.

The reports are in now. It’s been a resounding success. Not a single member has made a mistake and written 2012 on a check or other item after New Year’s Eve.