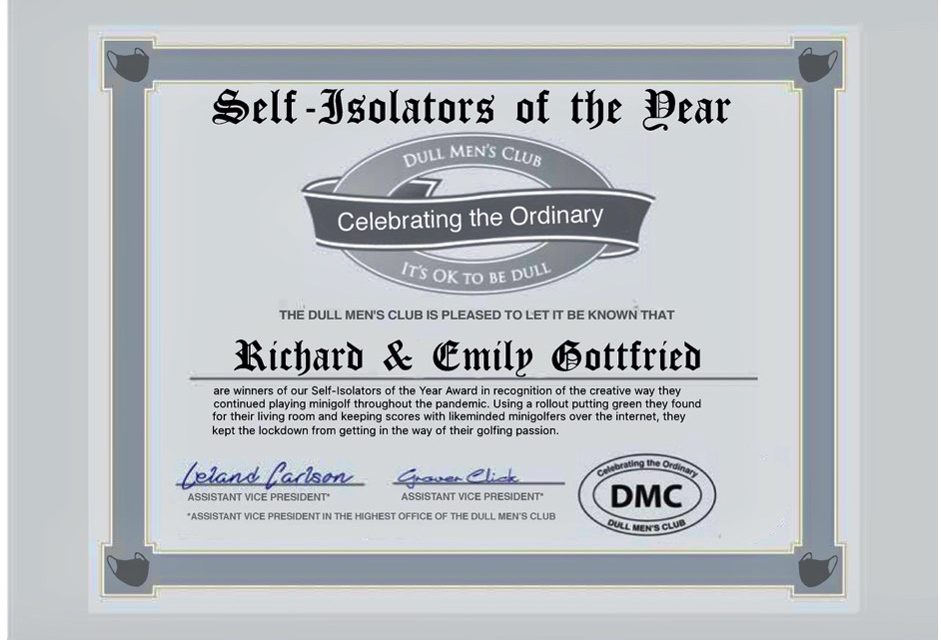 In recent years, we have been presenting an “Anorak of the Year” award. For 2018 it was presented to Kevin Beresford from Redditch, founder of the Roundabout Appreciation Society. For 2019 to Archie Workman, a drainspotter in Cumbria.

2020 was a different kind of year. Due to the lockdowns, our anoraks hung in the closet most of the year. But we dullsters (opposite of hipsters) survived just fine. “We don’t get put much anyway,” some of us would say, half-jokingly. While others were climbing the walls, we carried on with our quirky passions as usual in our sheds.

And in the living room like Richard and Emily Gottfried did in their home in Stockport. They are passionate about minigolf. Not only playing it — they have visited over 956 minigolf courses — but also keeping detailed records, archiving, and organising memorabilia.

The pandemic couldn’t keep Richard and Emily from their game. Although minigolf courses were closed, they carried on. They ordered a special carpet — a putting green — that they rolled out on their living room floor. Thanks to the internet, they could compete with others on the website “Putt18 — The Ultimate Global Putting Game.”

Eventually the putting green was moved to the kitchen as it works better when it’s on an uncarpeted surface.  Richard then won the Battle of the Brits competition.

While Putt18 and their living room has been a great way to play during the lockdowns, the Gottfrieds are looking forward to playing outdoors again. They had hoped to visit their 1,000th course by now. And they miss the typical minigolf adornments that wouldn’t fit into their home.    like bridges, tunnels, Ferris wheels, and windmills.

Club calendar for 2021: Is this The New Normal?, available on Amazon.