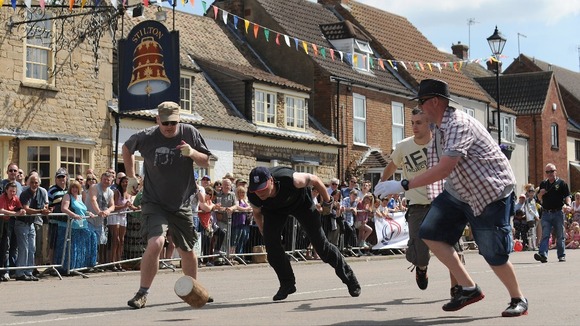 Have you been longing to be in a curling competition but don’t like to be out on cold ice?

How about cheese rolling on the streets of a charming village?

The annual Stilton Cheese Rolling  was held two days ago in Stilton, the village that gave the name to the blue-veined cheese.

It’s held annually on the first  Monday of May.

Teams race round chunks of Stilton-made cheese down High Street, a large crown cheering them on. The racing begins at the Bell Inn. The finish line is at the corner of Fen and Church streets.

The winning team receives a large block of Stilton cheese and a round of beers.

Sounds easy? It’s trickier than you might think to keep the cheese rolling forward on a straight path.

Fancy dress adds to the hilarity. This year’s theme was “Celebrating the Movies” with contenders dressed as the Smurfs, Cool Running and even Jaws.

Ironically Stilton Cheese is not made in Stilton. It is protected by a Certification Trade Mark and EU Protected Designation of Origin (PDO) that says it can only be made in Derbyshire, Nottinghamshire and Leicestershire. Stilton has a campaign underway to bring it back to Stilton.

The cheese rolling competition is accompanied by a typical May celebration, which is complete with a Maypole, live performances, games, food  — and of course cheese.

Attached below are pictures and links to press coverage of this year’s cheese rolling.

What we have not yet seen, however, are the race results — which team won?