Thanksgiving — Thanks from New York 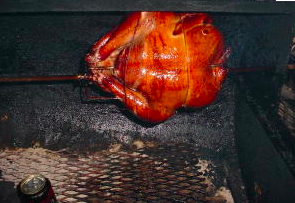 I read Gloria’s comment adding to the thankfulness list — that she’s thankful for the window in her oven — so she can watch the turkey bake for hours.

I’m doing something similar. I’m watching a turkey on a rotisserie. I enjoy watching it going around and around.

There’s so much for a dull man like me to be grateful for today. There’s Macy’s Thanksgiving Day Parade for example. I not only watched the parade, I went to Central Park West last night and watched them blowing up the balloons — fascinating indeed.

And sponsored by Macy’s, one of my favorite stores. Similar to what they say about Paul’s Pretty Good Grocery in Lake Woebegone, “If you can’t find it at Macy’s, you probably don’t need it.”