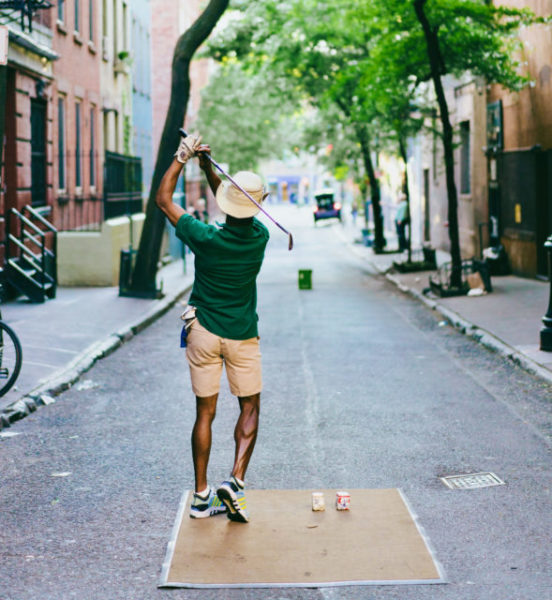 Patrick, aka Tiger Hood, has become a legend in NYC for bringing golf to the streets. For 14 years, he’s been golfing on the streets of Manhattan simply with a golf club, half pint milk cartons, and a milkcrate. He’s teaching others and holding competitions.

Tiger is a professional street photographer. “I was walking the street looking for photo ops when noticed a golf club sticking out of a trash bin,” he said. “I pulled it out and made a few swings. I picked up a tennis ball that was nearby and hit it against a building across the street. The ball bounced back to me. I did this several times. Then the ball got struck in scaffolding on the building.”

“I continued my walk. Then a lightbulb moment. I noticed milk cartons, small ones, spilling out of a trash bag. I picked up a few and stuffed them with newspaper. I had my golf balls.”

The “golf balls”: milk cartoons with newspaper articles and Tiger Hood logo taped around them

He has many fans now, including quite a few celebs. Films about him are on YouTube. He has xxxx followers on Instagram. “Thanks for much of this to New York Nico (Nicolas Heller) who has become my best bro,” Tiger said.

Will Smith taking selfie with Tiger

Tiger with his best bud Nico and his Brompton, a folding bike that gets him where he needs to be

He’s hit a few holes in one himself, which was exciting of course. But he gets more excited when someone he’s teaching hits one. That happened when Will Smithhit one. Tiger was overjoyed. “A total pro,” Tiger said. “He did it on his third swing. First swing—reading the script. Second swing—dress rehearsal. Third swing—standing-ovation performance.”

Question 1? what street is this, Minetta Street?

Question 2? What street is this?

Tiger with his best bud New York Nico and his Brompton, a folding bike that gets him where he needs to be

Only kidding about driving across Broadway. Tiger’s motto is ABC (always be careful)). He opted to putt instead.

Question 4? What golf course is this?

Question 5? Does the scene in this photo have something to do with Nike? I’m asking because I saw a mention of Nike somewhere in connection with this photo.

Tiger’s vocation is Street Photography. He’s sitting next to photos that are waiting for his customers.

At the end of the day

Getting “golf balls” ready for tomorrow