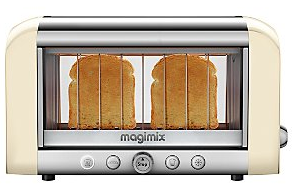 The Vision Toaster by Magimix:

Experience the only see-thru toaster — a viewing window that lets you watch the toasting process in action.

Click here to view it on Magimix’s website. You’ll see that it comes in four colors. Most Dull Men will want the cream one, certainly not the red one, and probably not black or silver.

Fifteen years of research and development led to the ultimate toaster for us Dull Men. We’ve been hoping for a toaster like this so we could watch toast toast. Now we have it — a toaster with a panoramic view of toast toasting.

Magimix Managing director Simon Kinder, in an article “Transparent toaster sees end of burnt toast” in The Telegraph said they could have rushed the product into production four years ago but held off because they wanted it to be perfect.

Kinder said, “The idea is incredibly simple and we started with the concept of creating a toaster where you could watch the toast browning 15 years ago. The problem was that we wanted to create something very simple which worked perfectly and did not obscure the view of the toast. We tested it to destruction and now we are happy we have a brilliant product which is well designed and looks great at the same time.”

“The response has been phenomenal,” Kinder added.

The article ends with fascinating points about the history of toast and toasting:

Here’s the URL to The Telegraph article in case you want to read more about toasters: http://www.telegraph.co.uk/news/newstopics/howaboutthat/6931661/Transparent-toaster-sees-end-of-burnt-toast.html