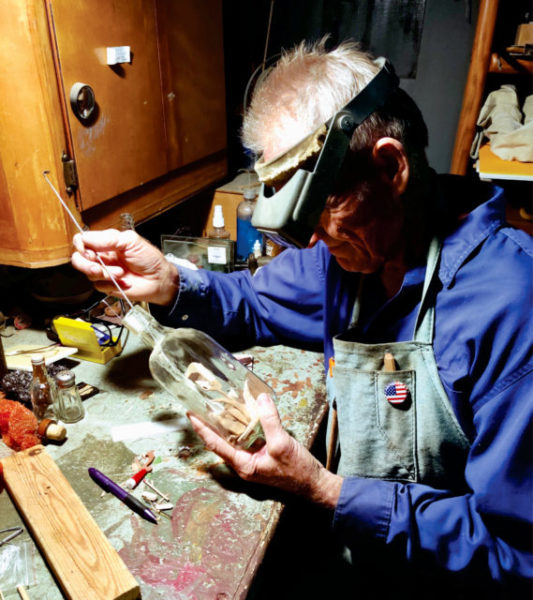 “Being able to escape to my workbench becomes a mini vacation,” Keith said. “I’m able to get away from the world’s woes and do something I truly enjoy. I return with a new perspective.”

Although he began with ships, Keith has gone further, much further. Besides ships, he has constructed over 100 other objects in bottles.

“The first time I saw a ship in a bottle was when I was seven,” Keith said. “My grandmother had one. I enjoyed seeing it every time I visited her. It always amazed me.” Several years later he leaned how to construct one.

After that, he lost interest for years. Although he dabbled at art in numerous ways, he was mostly busy with his work in the telecommunications industry and raising a family.

Fourteen years ago, after decades of abstinence, he hit the bottle again. It soon turned out that ships were no longer a challenge. He began to apply his skill to other objects: cars, motorcycles, helicopters, carousels, animals, people, buildings, and more.

For Barbara Hartsfield’s Collectable & Antique Chair Gallery near Atlanta, he engraved her name on two chair backs and used them for chairs he assembled inside a pair of salt and pepper shakers.

“Keith is uniquely creative,” Johnnie Meier said after Keith visited Johnnie’s Classical Gas Museum in New Mexico. “Some people aspire to think outside the box. For Keith, it’s inside the bottle.”

After the visit, Keith sent Johnnie a bottle with a model of the historic gas station that’s at the front of Johnnie’s museum.

“When I’m at art exhibits, I notice visitors look at paintings for about 30 seconds. When they get to my table, they spend 20 minutes. They are not as interested in what’s in the bottle as they are about how did I do it.”

“The secret is to first make or obtain pieces of the object small enough to fit through the neck of the bottle; then assemble the pieces in the bottle.”

For Keith, the techniques have largely been self-taught. “Most of the tools are ones I’ve developed myself. The one I used most is simple stretch of wire with a needle soldered to it.”

Many of tools are like what you see in the dental chair and see tools lined up on the tray in front of you. Working in a bottle is much like working in a mouth. Except the bottle doesn’t say “ouch.”

“Watch out for tricksters,” are Keith’s parting words. “The most common trick is a bottle that comes apart.”