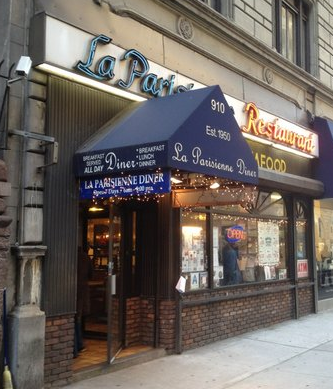 Although New York has many world-famous restaurants, there are places where dull men can comfortably eat, where reservations are not required, there’s no wait to get in, the food is good and reasonably priced.

There are around 600 diners in New York that were founded immigrants from Greece in the 1950s through the 1970s. These diners are now being operated by the second and third generation members of the families.

And desserts: pies and cakes, often in revolving display cases.

The paper coffees cups used by the diners, first used starting in the 1960s, have become a pop-culture totem. Ceramic replicas are now sold in culinary and department stores, at MOMA (Museum of Modern Art), and on Amazon (click here to find it in our aStore).

The blue and white colors of the cup are the colors of the Greek flag. There is a drawing of a Greek vase known as an amphora, and three steaming coffee cups.

The cup was designed by Leslie Buck, sales manager the paper cup company that manufactured the cups. Although Mr. Buck had no formal training in art or design, his cup was an instant success. Click here to read more about Mr. Buck.

La Parisienne is an alternative available to a dull man in the Carnegie Hall area, an area where pressures loom to go to the famous Carnegie Deli, the elegant Russian Tea Room, and the imposing Petrossian.

Founded in 1925. A reminder of a byeone era when soda fountains and lunchenetts were everywhere. Owned to this day by the founding family, now in the third generation’s hands.

•  British Traveler Magazine: “One of the top ten places to visitn in New York.”

•  Travel and Leisure: “The perfect destinaiton for a family breakfast.”

It’s been in many movies, including the Nannie Diaries (2007, with Scarlett Johansson) and Three Days of the Condor (1975, with Robert Redford).