"Uke of Wallington: one man and his ukulele round Britain," by Mark Wallington 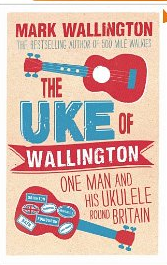 Is there any musical instrument more ordinary that the ukulele? I think not.

In his new book The Uke of Wallington, Mark Wallington records his adventures — and misadventures — on his six-week tour of Britain with his ukulele. He performed at open mic nights all along the way — from south to north — from Brighton to Cape Wrath. This was likely to be the first rock-‘n-roll tour on public transport.

A goal was to test the theory that people can’t hear a ukulele without smiling. Happily, as he reports on the final page of the book, “People had been kind all along. The ukulele really did make them smile.”

BBC Radio 4 has been airing readings from the book all week this past week. To listen to them, click here.

Is a world tour next? Perhaps. As Mark says at the end, “This wasn’t really the end of the road. The Faroe Islands were straight ahead out there, then Iceland. I bet there was an open mic in Reykjavik.”

The book is available from the DMC’s aStore, click here.