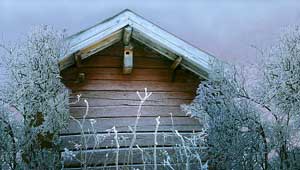 The Sauna Appreciation Society has a lot of good information about saunas, a rather dull pastime, which, until Nokia cell phones came along, was the most exciting thing Finland could come up with.

Is there anything much duller than taking a sauna? Sitting in a hot room waiting to sweat? And then telling yourself you are enjoying it?

Enjoy a brief history of the sauna. Saunas have existed in various forms for thousands of years. The first saunas were holes in the ground. A hole would be dug large enough to fit the entire tribe. The hole had a fire pit in its centre. And a roof. The Finns, being practical people, liked roofs over their saunas to retain the heat and prevent things from falling in like rain and snow.

(If you get a sliver in your backside from the bench, don’t holler too loud. Neighbors will think we are butchering a pig, and will be looking for pork chops the next day, and right away be asking, “When the headcheese be done?”)